Established in 1994, Animals Unlimited has been a staple to the Jackson community for over 20 years. Dr. Valerie Anderson started the hospital in 1994 and was the solo veterinarian until 2011 when she hired Dr. Genevieve Davis as a second veterinarian. In December of 2016 Dr. Davis elected to leave her position at Animals Unlimited to devote more time to her family and pursue other interests. Doctor Anderson does see companion animals, horses and livestock as well as daily surgeries. She also treats exotics and pocket pets. Farm calls and house calls are available too!
We have a number of resources for you to learn about how to take better care of your pets. Browse around and look at our articles and pet videos. The best veterinary care for animals is ongoing nutrition and problem prevention. If you want to ask a question call 740-286-8035 and we'll promptly get back to you. Animals Unlimited Veterinary Hospital is very easy to get to, and you can find directions on our Contact Us page. You can also subscribe to our newsletter which is created especially for Jackson area pet owners. In between your veterinary visits, your pet will benefit from you reading these free informative articles. 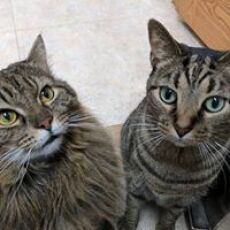